People who expect Maurice Jones-Drew to apologize for his tweet criticizing Jay Cutler's toughness will be disappointed.

Jones-Drew told NFL Network's Kara Henderson in an interview that aired Tuesday he doesn't regret his January post, which caused a backlash and even incited death threats from Chicago Bears fans who backed the team's quarterback.

"I haven't gotten a chance to, but I wouldn't apologize because I didn't do anything wrong, I don't think," said Jones-Drew, the Jacksonville Jaguars' two-time Pro Bowl running back. "I didn't commit a crime. I didn't kill anyone or rape anyone or anything like that. I mean, I stated my opinion, and it seems like you get more backlash for that than committing a real crime in some sense.

"I don't know, I don't feel I did anything wrong. I just said what everybody else was thinking at the time."

What Jones-Drew tweeted during the Jan. 23 NFC Championship Game was a direct shot at Cutler, who left with a knee injury in the third quarter against the Green Bay Packers with a Super Bowl berth on the line.

"Hey I think the urban meyer rule is effect right now... When the going gets tough........QUIT," Jones-Drew posted on his Twitter page.

The nature of Cutler's injury was unknown during the game, but it later was revealed as a sprained medial collateral ligament. Even with that knowledge, Jones-Drew insists that he doesn't have any regrets.

"I don't regret anything I do," said Jones-Drew, who played through a knee injury of his own last season before missing the final two games. "I mean, you think about everything you put out there anyway. I'm not one of these guys who's going to say, 'Well, I shouldn't have done it,' because I did it. I mean, I knew what I was doing when I tweeted it. I just didn't know that many people were following me (on Twitter) at the time."

Jones might have led the way, but he wasn't the only player to criticize Cutler. Darnell Dockett of the Arizona Cardinals and Bruce Gradkowski, then of the Oakland Raiders, were some of the current and former NFL players who took shots at Cutler via Twitter.

Cutler has said he isn't bothered by what happened and appreciates how his teammates, most notably linebacker Brian Urlacher, came to his defense in the immediate aftermath of the Bears' 21-14 loss.

"That's all new," Cutler said last month when he reported to training camp. "That's never been an issue for me. I've never been questioned about it. I didn't really know how to react to it. I know that anyone who has played with knee (injuries) should never question that. I know the guys in the locker room aren't going to. You can't get caught up in that stuff. ... You're going to have to take it as it is and move on." 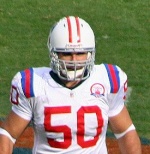 That got me thinking: Who are the AFC South players who need contract extensions before they get anywhere close to an expired contract at the start of the 2013 league year?

Here are my top six:

I understand there are some non-believers. In five seasons with the Texans, Schaub has played a full slate of games only twice. He’s not been consistently clutch in big moments.

Still, I see him as a quality engineer of Kubiak’s offense. I think the team loves him and has faith in him. And although rookie T.J. Yates did some good work while filling in for Schaub last season, I don’t think the Texans would be comfortable handing the team over to Yates after he's been in the league only two seasons, especially if he plays only a little or not at all this season because Schaub is in the lineup.

I’d make sure Schaub’s fully recovered from the serious right foot injury that ended his 2011 season. If he plays well in the first month of the season, I’d talk to his agent. Even if they wait until after the 2012 season plays out, gauging his health and seeing how far he can take them, Schaub is their guy.

He’s not the best player on this list, but as a starting quarterback, he goes to the head of the line. Is he a top quarterback in the league? My count says he’s 13th or 14th among current starters. You’d like better, but can do far worse and I don’t think you can project Yates to rank any higher. The Texans aren't going to be drafting at the top of the first round, and none of the guys better than Schaub are going to be hitting the market. So there is no place to go to upgrade.

[+] Enlarge
Connor Barwin Thomas Campbell/US PresswireConnor Barwin enjoyed a breakout season in 2011, collecting 11.5 sacks.
The Texans projected Barwin could be a quality pass-rusher when they drafted him out of Cincinnati in 2009 with a second-round pick. Last year, in Wade Phillips’ 3-4 defense, Barwin was a consistent pass-rushing force, playing nearly 95 percent of the team’s defensive snaps and recording 11.5 sacks.

Barwin is part of the reason the franchise could afford to let Mario Williams depart as a free agent. The Texans simply cannot allow Barwin to follow Williams out of town. And with the increase in 3-4 defenses around the league, there are a lot of teams that would make a play for Barwin if he came free.

Smith’s known for being an underrated player.

He’s an anchor for the Jaguars, and I expect he’ll shine in a healthy defense in 2012. The unit has a chance to be great, and Smith will shine if the coverage behind him is good and the rush in front of him can be consistent. They have the people for both of those elements to be in place.

The Jaguars would certainly like to keep a starting linebacker corps of Smith, Paul Posluszny and Clint Session together.

I don’t think he’s regarded around the league as a premier guy who would draw a ton of interest if he became a free agent. But he is regarded as an excellent player in the Texans' line scheme. The team is moving forward, replacing Mike Brisiel at right guard and Eric Winston at right tackle.

The Texans did what they had to in order to keep center Chris Myers. They will need to do the same with Brown. They must hold together the key pieces of what was an excellent group in 2011. Brown is vital for the success of Schaub, or Yates, as well as running back Arian Foster.

He’s a solid player on the rise. He plays a position where he will have a chance to establish himself as a productive leader who needs to be in place for the long term.

Cortland Finnegan is gone. And the team is weak at safety, where Michael Griffin is getting one last chance under the franchise tag and Jordan Babineaux owns a starting spot at least in part because the Titans don’t have other options.

McCourty is a smart player who should be the best member of the secondary in 2012 and beyond provided they are able to keep him.

He suffered a serious eye injury in a bar incident not long ago, but indications are he should be OK for training camp. Knighton has had weight issues since he came into the league. He seems to have gained better control of that, and general manager Gene Smith made it clear to Knighton that if he proves he can remain fit he’ll be taken care of in the long run.

Knighton moves very well for a very large man, and the Jaguars believe if their defense will be good, it will be because Knighton and Tyson Alualu anchor the middle, stuffing the run and moving the quarterback off his spot.

According to Forbes’ annual report on the most valuable franchises in professional sports, they are all in the top 47.

The Texans are the division's most valuable team, ranking 13th at $1.2 billion.

Says Forbes: “The Texans qualified for the playoffs for the first time in franchise history in 2011 by winning the AFC South. The Texans already were cash cow, despite their lack of success during the franchise's first nine years. They generate $50 million annually from nearly 200 luxury suites and 8,400 club seats, and their naming rights deal with Reliant Energy is the second biggest in NFL, behind only MetLife's for the Giants and Jets home. Reliant is paying $300 million over 30 years.”

Says Forbes: “The Colts start a new era with the 2012 season after parting ways with Peyton Manning and drafting new franchise quarterback Andrew Luck out of Stanford with the new No. 1 overall pick. The Colts fell apart in 2011--winning just two games with Manning sidelined the whole year after multiple neck surgeries. The Colts have one of the best stadium deals in the NFL. The team pays just $250,000 a year in rent and the city covers all operating and maintenance expenses at Lucas Oil Stadium.”

Says Forbes: “The Titans play in one of the NFL's smallest markets but are consistently profitable thanks to a ardent fan base. The team sold out its 69,000-seat LP Field last season, which it has done every year since the stadium opened in 1999 (134 games and counting). Team owner Bud Adams has a good lease with the city. The Titans operate the stadium and get reimbursed over $1 million a year for stadium upkeep. The team had 96.8% of season ticketholders renew their tickets for the 2011 season, but renewals are down in 2012 and the team is offering half-season tickets for first time at LP Field.

Says Forbes: “(Shahid) Khan's purchase of the Jaguars was completed in January in a deal worth $760 million. The Pakistani-born American made his fortune with auto parts manufacturer Flex-N-Gate, which generates $3 billion in annual revenue. Khan has vowed to keep the team in Jacksonville, despite attendance woes in recent seasons that led to nearly 10,000 upper deck seats being tarped over to encourage sellouts and satisfy the NFL's blackout policy.

Ya got that right...