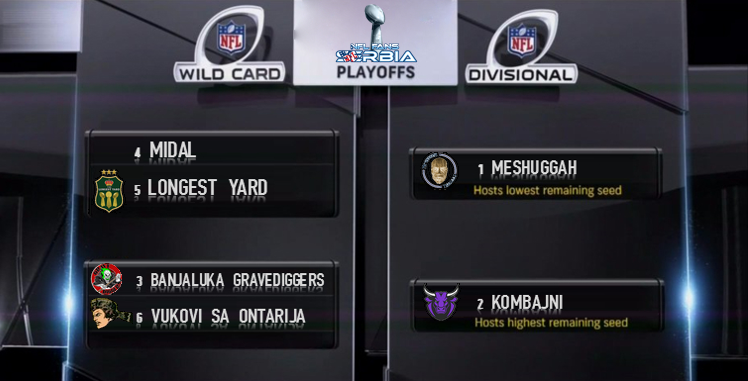 Vukovi sa Ontarija (8-5) is in sixth place and has the sixth-highest points per game average at 106.38. Vukovi sa Ontarija continues defying the pundits, and has beaten their projected score six weeks in a row, being projected underdog role (4-9) score.
KEY PLAYER Ben Roethlisberger 265.10 (No.5 overall in Fantasy points)

The historical series between these two teams has been a constant battle with Vukovi sa Ontarija owning the 4-3 lead over Banjaluka Gravediggers, but Gravediggers defeated Vukovi two times in as many head-to-head matchups this season.

Midal (8-5) is in fourth place and has the fifth-highest points per game average at 107.67. Midal lived up to expectations being projected mid-table finish (8-5).
KEY PLAYER Russell Wilson 234.04 (No.11 overall in Fantasy points)

Longest Yard (8-5) is in fifth place and is the first in points per game average at 117.67. Longest Yard has the second-highest team performance in league history (1,529.74). Longest Yard somehow underperformed, being projected best league score (10-3).
KEY PLAYER Todd Gurley 282.90 (No.2 overall in Fantasy points)

The historical series between these two teams has been a constant battle with Longest Yard owning the 3-2 lead over Midal, but Midal defeated Longest Yard in their only head-to-head matchup this season.
___________
Vlado jedini nema grb pa mu je ubacen NO 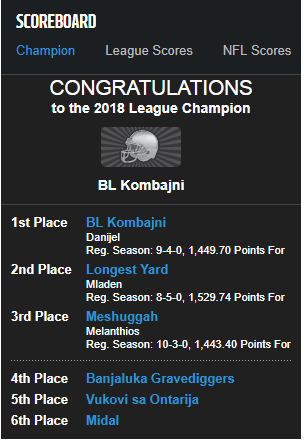 BL Kombajni Squashes Longest Yard, Celebrates League Championship
BL Kombajni ended the regular season in second place with a record of 9-4. They also ranked second in the league with 111.52 points per game. After a bye in the first round of the playoffs, BL Kombajni beat Banjaluka Gravediggers, 103.40 to 81.22, along the way to winning the trophy. They had the league's best average scoring margin this season, outpacing opponents by 21.07 points per game.

i ovde i u keepersu