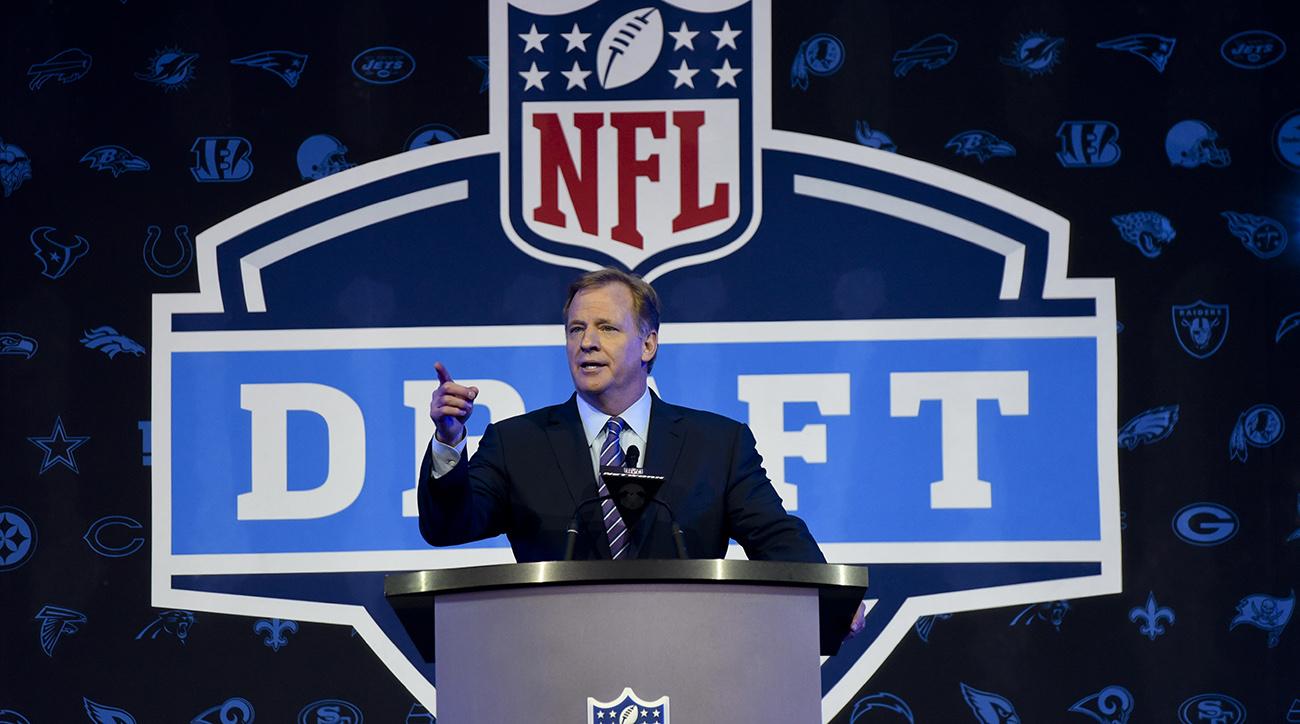 At 6-foot-6 and just over 230 pounds, Key has plenty of room to grow into his gigantic frame. Even at sub-240 pounds in 2016, the Tigers sophomore had 55 tackles, 12.5 tackles for loss, and 11 sacks after a freshman All-American season in 2015. If he adds some weight to his and builds on his first two seasons at LSU, Key is a prime candidate to go No. 1 overall.

Darnold shined in 13 starts as a redshirt freshman last season. He completed more than 67 percent of his passes with 31 touchdowns to just nine interceptions. And he ended the season on a high note. Darnold went bonkers in a crazy comeback victory in the Rose Bowl against Penn State. He threw for 453 yards with five touchdown passes and one pick. If he tightens up his delivery, and shows more consistency drifting in the pocket, he should be a top-three lock.
Ad By Mazda The All-New Mazda CX-5 Artfully crafted to make driving better. Experience the all-new Mazda CX-5 at your Mazda dealer.

Landry has everything NFL evaluators want in an edge-rushing specialist. At 6-foot-3 and 250 pounds, he possesses quality outside linebacker size. The production is undoubtedly there too. Even as a sophomore in 2015, Landry had 16 tackles for loss and 3.5 sacks. In 2016, he led the ACC with 16.5 quarterback takedowns to go with 22 tackles for loss. With another big season, Landry will compete with Key to earn the No. 1 edge-rusher spot in the 2018 class.

Like Landry, Rudolph will check many boxes for NFL scouts and GMs. Firstly, he'll enter the 2018 draft with loads of experience. He's already started 29 games and thrown 958 passes. As far as efficiency, Rudolph's figures are stunning. He has 55 touchdowns to just 17 interceptions in his college career, including a 28/4 TD/INT ratio in 2016. Also, he's 6-foot-5 and 235 pounds and plays in the wide-open Big 12. A pure pocket passer with a strong arm, there's not much to dislike about Rudolph's game.

A former five-star recruit with freakish athleticism, linebacker-esque hitting ability, and cornerback-like ball skills. That's a description of either former Florida State safety Jalen Ramsey or current Seminoles star Derwin James. At 6-foot-3 and 211 pounds, James is enormous for the position. He's super-fluid on the field with quick play-recognition gifts, as evidenced by his 91 tackles as a true freshman in 2015. He missed most of 2016 with a knee injury but should be back to 100 percent for the 2017 campaign.

The 6-foot-4, 310-pound Wilkins only has 5.5 sacks thus far at Clemson, but in 2016, he was a terror on the interior, accumulating 13 tackles for loss and knocking down nine passes. The Tigers have become a first-round pick factory, and Wilkins looks to be the next Clemson product to go early in the draft.

Guice was more impressive than Leonard Fournette in 2016. It was obvious. Even in 2015, when Fournette was 100 percent healthy, Guice, then a freshman, had his fair share of eye-popping runs when he averaged 8.5 yards per carry on 51 rushes. At 5-foot-11 and 222 pounds, Guice packs plenty of power yet has sudden agility, elite vision, and deceptive breakaway speed to round out his complete game.

Guice and Barkley will have a tremendous battle to take the crown as the nation's top running back in 2017. Barkley has averaged 5.7 yards per carry on his 454 rushes in his two season at Penn State, and he's scored 25 touchdowns on the ground. He's 5-foot-11 and 223 pounds and runs with a balance, low center of gravity, and the ability to make a cut on a dime. In the open field, he's dangerously elusive with keen vision, and he possesses good long speed. Barkley has "NFL feature back" written all over him.

At 6-foot-4 and 215 pounds, Sutton looks like a No. 1 wideout in the NFL. Last year in Dallas, as a redshirt sophomore, he had 76 receptions, 1,246 yards, and 10 scores. His routinely showcased his high-pointing ability, physicality, and surprising speed down the field. He likely would have been picked in one of the first two rounds in the 2017 draft but chose to gain even more momentum by staying in school for another season.

McFadden and James form the best safety-cornerback duo in the country in 2017. Last year, McFadden reeled in eight interceptions, which led the nation. At 6-foot-2 and 200 pounds, he dominated with size and athleticism at times but had moments that showed a lack of sound tackling ability. From a physical perspective, it's all there for this Florida State standout. He'll be returning from a torn labrum this season too.

Washington has been Rudolph's top passing-game priority during their time together in Stillwater. The 6-foot, 205-pound wideout has been a premier deep threat over the past two seasons, making 124 grabs at nearly 20 yards per catch with 20 total receiving touchdowns. Having Rudolph throwing him the football will likely help Washington amass huge numbers in his final season at Oklahoma State.

As a true freshman in 2015, Rosen played well beyond his years and looked to be a future No. 1 overall pick. He completed 60 percent of his passes with 23 touchdowns and 11 picks. He consistently demonstrated the pocket poise, accuracy, and shrewd decision-making with the Bruins that made him the No. 1 pro-style quarterback recruit in the nation coming out of high school. The 2016 season was somewhat of a disaster for Rosen. While his yards-per-attempt average increased, his completion percentage went down and he tossed 10 touchdowns to five interceptions before getting injured. With a rebound season, the 6-foot-4 Rosen will likely be in the top-10 discussion.

The latest in an unfathomably long line of first-round caliber cornerbacks from Alabama during the Nick Saban era, Fitzpatrick has played both safety and corner for the Crimson Tide. The NFL will like that versatility. He's 6-foot-1 and 203 pounds with good strength and plus ball skills. He had two picks as a freshman in 2015 and intercepted six passes as a sophomore. Oh, and he's already returned four of those picks for touchdowns.\
14. Tyquan Lewis | DE/OLB | Ohio State | Senior
In 2016, Lewis was the Big 10 Defensive Player of the Year. At 6-foot-5 and 266 pounds, the edge-rushing terror had 10.5 tackles for loss and eight sacks, which was actually a step down from the season he had in 2015 (14 tackles for loss, eight sacks, and 54 total tackles). It was in 2015 that he saw a lot more one-on-one with Joey Bosa on the other side of the defensive line. Scouts will look to see if Lewis can take the next step as "the guy" opposing offensive lines scheme to stop in 2017.

McGlinchey has played both left and right tackle for the Fighting Irish, making third-team All-American in 2016 as Notre Dame's left tackle. At 6-foot-7 and close to 300 pounds, McGlinchey has the size of a blindside protector in the NFL. During his tenure in South Bend, head coach Brian Kelly has sent a variety of polished offensive linemen to the professional ranks.

Though Texas has fallen on some hard times over the past few years, Williams has starred for the Longhorns ever since he stepped on campus. He started at left tackle as a true freshman in 2015, which is no easy task. Last year, he was named first-team All-American, which made him one of two sophomores on the offensive side of the ball to earn that prestigious distinction. The 6-foot-6, 290-pounder is light on his feet and has a super-sturdy anchor in pass protection. With another sound year on the edge, he could challenge McGlinchey to be the first offensive lineman selected in the 2018 draft.

Chubb, the brother of talented Georgia running back Nick Chubb, came into his own with the Wolfpack in 2016. He had 21 tackles for loss and 10 sacks. His chiseled 6-foot-4, 275-pound frame will undoubtedly intrigue NFL scouts. With his strength and pass-rushing ability, he has the potential to be a three-down defensive lineman who kicks inside to defensive tackle in nickel situations, like Michael Bennett does with the Seahawks.

The 6-foot-1, 210-pound Cain has electric flashes of downfield speed and yards-after-the-catch creativity in the open field. He'll go into his junior season with 74 career catches for 1,306 yards and 14 touchdowns. It'll be interesting to see how he produces without Deshaun Watson throwing him the ball, but Cain will probably shine in his role as Clemson's No. 1 target. He's very talented, as evidenced by his five-catch, 94-yard performance against Alabama in the national title game this past January.

Falk probably would have been picked in the second or third round of the 2017 NFL Draft but decided to get one more year of schooling in Mike Leach's Air Raid offense. Historically, quarterbacks from that system haven't performed well in the NFL, but Jared Goff was the first pick in 2016 and Patrick Mahomes was the No. 10 overall selection in the 2017 draft. Falk might be the most "NFL-ready" out of the three, as he's already been given the freedom to call the plays for the Cougars. The 6-foot-4 quarterback has a decent arm and will light up the stat sheet once again in 2017.

At 6-foot-1 and a rock-solid 312 pounds, Nnadi is quite difficult to move on the interior and has the twitchiness to attack upfield. He registered 10.5 tackles for loss and six sacks in 2016, a sizable jump from 2.5 tackles for loss and 2.5 sacks as a sophomore. Florida State has a handful of talented defensive linemen on its roster this season, anchored by the powerful and quick Nnadi.

Posts : 71163
Age : 49
Location : u resetu
Depending on how the 2018 NFL draft order shakes out, USC quarterback Sam Darnold could return to school next year for his junior season.

Per NFL Network's Albert Breer (via Nick Camino of WTAM 1100 in Cleveland), Darnold is going to wait and see which teams are picking in the top two spots next April before deciding if he will leave the Trojans. If the Browns are in the top two, he may head back to USC.

The Browns are one of two winless teams, along with the San Francisco 49ers, in the NFL. Cleveland would have the No. 1 overall pick if the season ended today based on the strength-of-schedule tiebreaker.