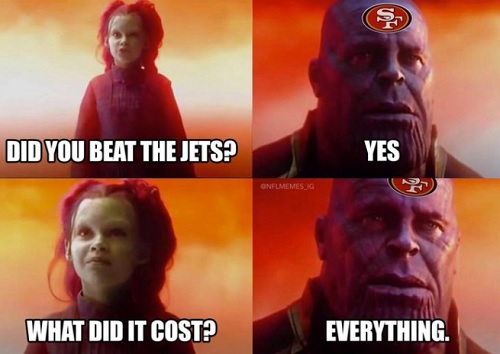 If you're looking for omens, the 49ers plane was crashed into on the runway Friday before their departure forcing an airport change andlong delay and their MRI truck in West Virginia broke last night so they don't have results.

Posts : 43386
The 49ers have concerns about the quality of the playing surface at MetLife Stadium. It’s a valid and important consideration, given that the 49ers play there again on Sunday, against the Giants.

The NFL says that the field was fine. Because the NFL’s field inspector, who inspected every field, found it to be fine.

Via Ian Rapoport of the NFL, the independent field inspector determined on September 12 that the field “was in compliance with all applicable NFL policies, including the Mandatory Practices for Artificial Surfaces.” Rapoport also notes that, within 72 hours of each game, “clubs must certify that their fields are in compliance with applicable policy, and that occurred in this instance.”

Of course it did. But every crappy field that we’ve ever seen during an NFL game in recent years (including the green-painted dirt at FedEx Field for the playoff game that resulted in Robert Griffin’s major knee injury) also was certified by the independent inspector and by the team. The existence of a certification process based on objective measurements and standards doesn’t magically make the field completely and totally acceptable.

In this specific case, the new turf at MetLife Stadium was certified by the Giants before Week One and the Jets before Week Two. As PFT reported last night, neither the Giants nor the Steelers had complaints about the surface after Monday night’s game.

As PFT also reported, NFL field operations would take a closer look at the surface, based on the 49ers’ complaints. Hopefully, the NFL won’t retreat from that position, opting instead to shout “serenity now” and to defer to a process that has proven to be far from foolproof, given that there have indeed been issues with fields in the past.

What’s the harm with taking a closer look at the surface and ensuring that every player’s safety will be respected and protected? If the field is fine, it’s a simple exercise to confirm it.

That said, if a closer look at the field determines that the field isn’t fine, an investigation that finds otherwise would create a real issue for those who previously certified that it was.

Still, the right thing to do would be to listen to the 49ers’ concerns, and to determine based on a careful examination of the field whether they have merit. The problem for the league is that doing so risks opening a box full of Pandora (#Simmism), and that the path of least resistance is to continue slamming the rubber stamp onto the form and declaring that there’s nothing to see here.

Posts : 43386
After a long negotiation and multiple visits, Ziggy Ansah is finally signing with the 49ers.

San Francisco coach Kyle Shanahan said today that the 49ers and Ansah have agreed to terms, and he’ll officially sign once he passes through the league’s COVID-19 testing protocols.

Although the 49ers and Ansah had been talking for more than a month, the team had more of a sense of urgency about signing the veteran defensive end after their top two players at the position, Nick Bosa and Dee Ford, both suffered injuries. Bosa is expected to miss the rest of the season with a torn ACL suffered on Sunday, and Ford was already dealing with a neck injury.

The No. 5 overall pick in the 2013 NFL draft, Ansah had a couple of very good years in Detroit, recording 14.5 sacks in 2015 and 12 sacks in 2017. But he has struggled with injuries and been ineffective when he did play the last couple of years. The 49ers hope he can show he has something left and can contribute to a defense that was one of the best in the NFL last year, but is operating at less than 100 percent this year. 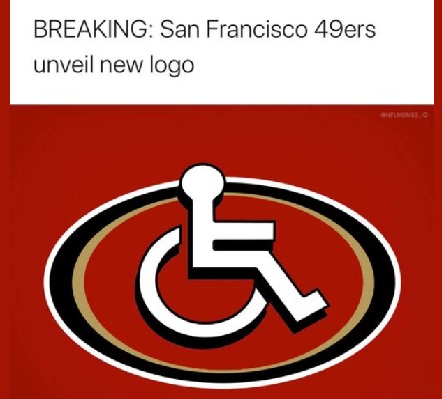 Posts : 38703
Age : 43
Location : Na pravom putu
"My favorite quote is, 'Moving a man from Point A to Point B against his will is the best feeling you'll ever feel,' " Kittle said. "On top of that is when you flat-back a guy and you feel his breath exhale, you kinda feel his soul leaving his body. It's just a really good feeling. It's one of those things: I would 100 percent pancake a guy and steal his soul over scoring a touchdown."