Posts : 10415
Age : 31
Location : Vrsac-Novi Sad
Chip Kelly: "My job is to win right now. How do you think I’d be received in Philly if I told them we were going to write this year off? Those people that are waving to me on the streets right now? That ain’t going to happen. But that’s never been my mentality, either. We’re not writing anything off. We’re going out there to compete and see how it falls, but that’s never been our mentality. I don’t think anyone on our staff, anyone in our locker room...you want to talk about our players buying in? If I went in the locker room and said, ‘This is going to be a really good year for us to get ready for the following year,’ that’s not going to work. No one has a mindset like that. So our decision isn’t based upon what is the future two years down the road, three years down the road. I don’t think that far."

Posts : 77336
Age : 28
Location : Ruma
Philadelphia Eagles wide receiver Jeremy Maclin has suffered a torn ACL in his right knee, will miss the entire 2013 season. This is his last year under contract with the team.


As Eagles coach Chip Kelly tries to maximize the performance of his no-huddle, hurry-up offense, he needs maximum cooperation from his players.

So far, he’s not getting it.

The biggest culprit was running back LeSean McCoy. Based on a review of the full game broadcast, McCoy left the ball on the ground at least 10 times.

At one point in the second quarter, McCoy flipped the ball to the officials after a play. Soon after that, he left it on the ground, stopped, retrieved it, and gave it to the officials.

If the change was the result of being reminded about it on the sidelines after consistently failing to give the ball to the officials during the first quarter, it didn’t stick. He quickly resorted to leaving the ball on the ground after a play.

Others who left the ball on the ground at least once include running back Bryce Brown, receiver DeSean Jackson, quarterback Mike Vick, and receiver Jason Avant.

While it doesn’t create a major delay, every second counts in Kelly’s go-go offense. And for Kelly, who wants the system to run a certain way, it has to be maddening that the guys aren’t doing what they expressly have been told to do.

It’s unclear when they were first told to do it this way. Either Kelly has been harping on it throughout the offseason program, training camp, and the preseason and they continue to ignore him, or he has just realized only recently that time was being wasted by leaving the ball on the ground instead of getting it in an official’s hands.

Regardless, the Eagles could be getting even more plays called if the players start doing what Kelly wants them to do.

It’s unclear how many more snaps they would have had on Sunday against the Chargers. As it stands, Philly had only 58. San Diego had 79 plays from scrimmage, despite often draining the play clock in a no-huddle approach while quarterback Philip Rivers made changes based on the pre-snap look.

The Chargers ended up having the ball more than 40 minutes, too. Kelly has said that he’s not concerned about a 40-20 split, as long as the Eagles get their snaps in. On Sunday, it was less like the UCLA game Kelly mentioned in August and more like the far bigger NFL game in which the Buffalo K-gun offense was stymied both in time of possession and snaps by a grind-it-out Giants team.

While the Chargers did much more throwing than grinding on Sunday in Philly, they came up with an approach that others surely will copy in the coming weeks.

Starting on Thursday night, when the Chiefs and Andy Reid come to town. 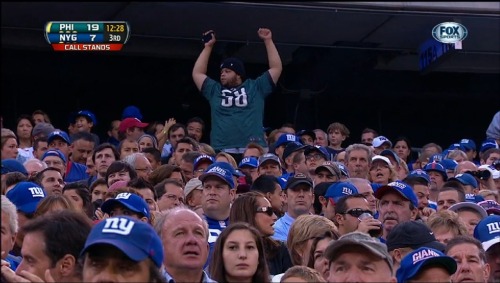 Posts : 44578
Eagles quarterback Michael Vick is expected to miss a week after suffering a hamstring injury on Sunday.

Vick is unlikely to play this week against the Buccaneers, Adam Schefter of ESPN reports.

During Sunday’s game against the Giants, Vick grabbed his hamstring and was obviously in pain at the end of a run, and he said afterward that the hamstring was a problem.

With Vick out on Sunday, Nick Foles will start against the Buccaneers. Eagles head coach Chip Kelly has insisted that Vick is his starting quarterback when healthy, but Foles will get an opportunity to try to change Kelly’s mind on Sunday.

Posts : 44578
It’s been a strange 14 days for the Eagles. While quarterbacks Nick Foles and Mike Vick seem to be getting along (after all, they did a joint press conference), bizarre dynamics continue to be at play regarding Vick’s status.

It could get more bizarre soon. Per a league source, Vick could return to action as soon as next week, when the Eagles host the Giants.

They may need Vick, because Nick Foles currently has a head injury.

On Sunday, Vick was inactive — even though he was listed as questionable for the game due to a hamstring injury suffered two weeks ago against the Giants. It’s no surprise, given that Vick declared himself to be out on Thursday.

Last week, Vick also was questionable, even though there was no way he’d play. The Eagles dressed him, presumably to perpetuate the ruse, even though Vick said the night before the game that he has a “long road” to recovery.

By consistently contradicting the team regarding his own status, Vick has created the impression that he wants defenses to know that they’ll be preparing for Foles. Now that Vick could be moving toward coming back, Vick’s incentive will remain to downplay his status, so that defenses will prepare more for Foles and less for Vick.

If Foles can’t play, preparation won’t matter. (Then again, Foles’ status could now become another part of the shell game.)

Though it’s not in the team’s best interests for Vick to undermine the messages that the Eagles may be trying to send, Vick needs at a certain level to think about his own best interests. With more than $2 million tied this year to playing time and his next contract sure to hinge on whether Vick is able to play and play well, Vick needs to get his job back as soon as he’s healthy enough to play.