Posts : 39815
Age : 43
Location : Na pravom putu
The first two-plus weeks of training camp have resulted in at least 15 season-ending knee injuries. Welcome to the summer of the torn anterior cruciate ligament. Even Atlanta Falcons President Rich McKay, the chairman of the NFL's Competition Committee, told USA TODAY Sports, he thinks "there have been more ACL injuries than ever."

Malcom Floyd, the Chargers' No. 1 receiver, had to be driven off the field after a collision during a one-on-one drill during practice Monday afternoon, but an MRI revealed a knee "strain," team spokesman Bill Johnston said Monday night.

According to the Redskins' official Twitter account, head coach Mike Shanahan told reporters that Thomas will undergo surgery and is expected to be out four to five months, ending his 2013 season.

Posts : 40937
Age : 47
Any Tom Brady injury news is big news. It remains to be seen if Wednesday's developments qualify as a serious concern or just a brief scare for New England Patriots fans.

Brady left practice Wednesday with an apparent knee injury, according to multiple reporters on the scene. The Patriots are practicing against the Tampa Bay Buccaneers in New England.

Greg Bedard of TheMMQB.com watched Brady grab his left knee, limp off, before briefly returning to the field. Brady reportedly did not look comfortable and then had the knee checked out by trainers. Ben Volin of the Boston Globe watched a fan video that shows left tackle Nate Solder getting pushed back into Brady's knee.

After talking with coach Bill Belichick and offensive coordinator Josh McDaniels, Brady left the field. Brady tore his left ACL in Week 1 of the 2008 season.

We'll let you know more on the injury throughout the day. In the meantime, Ryan Mallett and Tim Tebow will get some extra practice snaps. 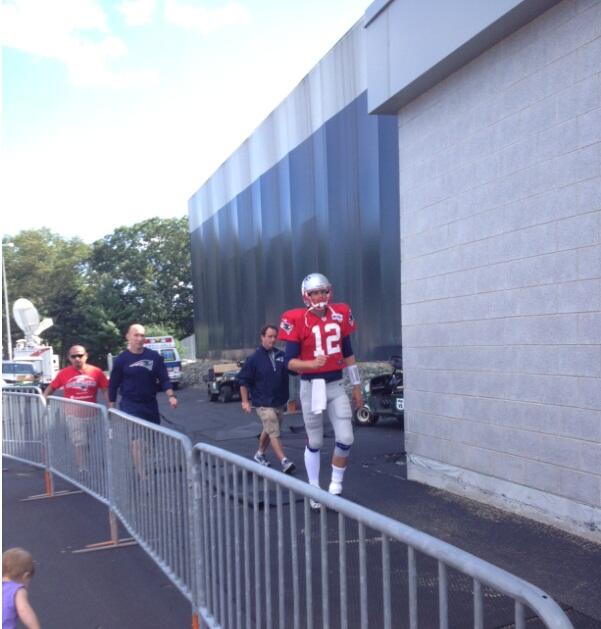 Posts : 43422
MRI on Patriots QB Tom Brady's knee was negative and he now is considered day to day, per ESPN source with knowledge of injury.

Posts : 43422
A 2nd opinion on Chargers WR Malcom Floyd's knee revealed no structural damage. Time missed will depend on how he feels.

Posts : 43422
Saints LB Jonathan Vilma undergoing knee surgery today in Philadelphia; out for preseason, should be back for opener.

Posts : 43422
The left knee injury that kept Steelers rookie running back Le’Veon Bell out of the lineup in the club’s preseason opener has again become an issue.

In welcome news for Steelers fans, Ian Rapoport of NFL Network reports Bell’s injury is not serious. The Steelers’ next preseason game is Monday, giving Bell some more time to rest if needed.

Bell is listed as a co-starter with Isaac Redman at running back on the club’s latest depth chart. And Redman, too, is dealing with an injury. He suffered a stinger on Thursday, Tomlin said, according to the club.

Jonathan Dwyer is the Steelers’ third-string back.

Posts : 43422
The Chargers have provided an update on the condition of wide receiver Eddie Royal after he left Saturday’s practice in an ambulance after coming down hard while making a catch.

Royal went to the hospital and has been diagnosed with a bruised lung. The Chargers also announced that Royal is being evaluated for a concussion and that all subsequent tests were negative.

There’s no timeline provided for Royal’s return, but Browns linebacker Barkevious Mingo is expected to miss a week or two after sustaining a bruised lung on Thursday night. All injuries are different, and the concussion obviously makes this a different case, but it is a safe bet that Royal will be off the field for a while.

That leaves the Chargers without three of their projected top receivers for the time being as Danario Alexander has a torn ACL and Malcolm Floyd is expected to miss the rest of the preseason with a knee injury of his own. Vincent Brown, Keenan Allen and the recently re-signed Seyi Ajirotutu will all be in line for more snaps as a result.

Posts : 43422
Dolphins TE Dustin Keller tore his ACL, MCL, PCL and, as if that weren't enough, dislocated his knee, per source.