Walton has worked as the Dolphins' featured RB ever since the team traded Kenyan Drake to the Cardinals. Miami is expected to move forward with Kalen Ballage as their three-down back. It certainly wouldn't be surprising if they add to the position in free agency. 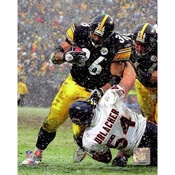 The Dolphins signed Parker to a four-year contract extension that runs through 2023, the team announced Friday. NFL Network Insider Ian Rapoport reported the extension is worth $40 million over four years, including $21.5 million in guarantees and an $8 million signing bonus.

Perhaps all the receiver needed was a new coach. A little more than a year after Parker's agent publicly ripped former Dolphins coach Adam Gase and the Dolphins reportedly shopped Parker amid his worst professional season, the wideout has blossomed. Parker is in the midst of his best campaign, catching 55 passes for 882 yards and six touchdowns. The latter two totals are the best in a season in Parker's career.

"I'm happy he's been able to stay healthy and it's working out well for him," Gase said, per The Miami Herald. "That's the player everyone was expecting when he was drafted."