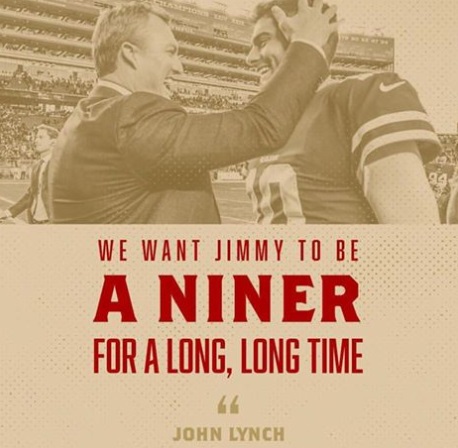 Posts : 68692
Age : 46
Location : sa las vegas rascals
Jimmy Garoppolo has been pragmatic and guarded in his approach to discussing his long-term future with his new team.

The 49ers’ budding quarterback is officially unsigned for 2018 after being responsible for a franchise resurgence that took just five weeks. San Francisco became the first team in NFL history to begin 0-9 and finish with more than three wins.

Garoppolo catalyzed that turnaround by winning all five of his starts, while the 49ers finished the season winning six of seven. And because of his play under center, they’ll be among the most talked about teams expected to make a jump to playoff contention in 2018.

But Garoppolo has been reserved about speaking about his long-term future while willing to acknowledge how well his transition has gone. Garoppolo after the win over the Rams in the finale said his pairing with San Francisco has been a “perfect match.”

Garoppolo while cleaning out his locker on Monday elaborated: “I think just me mixed with the offense, the offense mixed with me. It’s a special locker room we got here, a very tight-knit group. From the first day I got here, they were very accepting.”

So, is it safe to say you want to be here long term?

“I like being here. I think we had a good thing going at the end of this year. And we’ll see what happens,” he said.
Like this article?

It appears Garoppolo’s prerogative is to avoid making proclamations with important contract negotiations upcoming, other than to say he likes being with the 49ers. That could be the message of an agent trying to keep the thought process in these negotiations out the public forum, which is certainly understandable.

Garoppolo was asked why he’s avoiding saying he wants to stay with the 49ers over the long haul.

“I haven’t really had a chance to think about it,” he said. “I think the season just ended, you know? We got a long ways to go and everything. When we get those conversations started, we’ll go from there.”

The 49ers have made it clear Garoppolo will be their quarterback in 2018 by at least giving him the franchise tag, which is expected to be worth some $25 million fully guaranteed.

Garoppolo and his agent, Don Yee, who sat next to the team’s chief contract negotiator Paraag Marathe during Garoppolo’s introductory press conference on Halloween, will likely begin talking about a multi-year contract with San Francisco later this month.

General manager John Lynch and Kyle Shanahan will speak to the media on Tuesday and answer questions about Garoppolo’s future.

Posts : 68692
Age : 46
Location : sa las vegas rascals
The 49ers are one of six eligible teams to be on HBO’s “Hard Knocks” documentary series that covers an NFL team’s training camp every summer.

But they’d prefer not to be on it.

That’s what general manager John Lynch told NBC Sports Bay Area Tuesday when asked about being featured on the show.

“It’s not something we would be really excited about,” Lynch said. “I love the show, but I think some thing are best left behind closed doors. I fundamentally have a problem with cutting players and things of that nature (on camera). It’s not something we’d be thrilled about.”

According to the story, the 49ers already informed the NFL they don’t want to be featured on the show, but the league could force San Francisco to take part anyway.

The 49ers will be one of the most talked about teams this offseason after setting a record for the longest winning streak after starting 0-9. The 49ers won their last five games with Jimmy Garoppolo at quarterback, who has the up-and-coming star power to draw big ratings.

There are three exemptions that allow teams to avoid being featured on “Hard Knocks.” They have a first-year head coach, they’ve gone to the playoffs over the last two seasons and/or they’ve appeared on the show during the last 10 years.