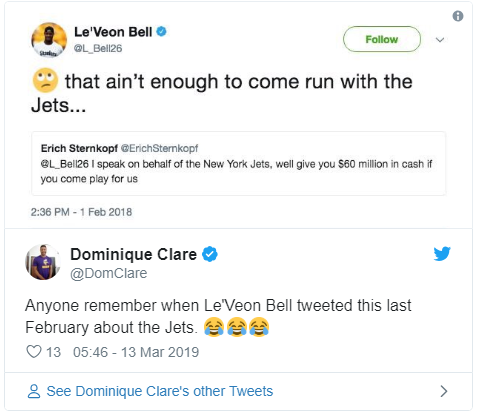 Posts : 8856
Le’Veon Bell mocked on Twitter for his Jets deal

Le’veon Bell really took less years, less money, less guaranteed over the first two years, missed out on a 14.5 million dollar franchise tag and a chance to win a super bowl just to rot in football purgatory with the jets
Le’Veon Bell held out to make as much money as Devin Funchess

His $13.1 average annual salary barely moves him ahead of Arizona's David Johnson, who signed a new contract in 2018, and leaves him more than $1 million shy of what Todd Gurley. This is the same Bell who was apparently seeking a payday in $17 million per season. And it was just a year ago, according to NFL Network, that Bell declined a five-year, $70 million offer from the Steelers. And what did Bell sacrifice in the name of football capitalism? $14.54 million — guaranteed — to play one final season in Pittsburgh. A legit shot at a Super Bowl ring.

Fast forward to 2019, and Bell has forfeited a very generous salary, hard to come by at a position especially susceptible to the NFL meat grinder. He took a stand ... to eventually accept a marginally better pact in terms of guarantees yet inferior in terms of yearly salary and total compensation — and worse still when factoring inflation and time value of money. 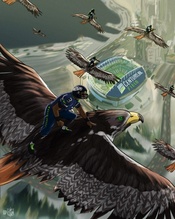