Posts : 43179
The race card,” Marshall said. “There are a lot of players out there that believe that white players — specifically, at the quarterback position — are treated differently.”

He went on: “This is how guys are feeling, this is not just my opinion,” he said. “These are conversations I’m having with guys.

Marshall was then asked if he believed black players were held to a different standard. He responded: “Absolutely. At times, yes.

Posts : 43179
The Jets got some good news from the Monday MRI tube.

The team announced that cornerback Antonio Cromartie did not tear his ACL yesterday against the Browns, and has been diagnosed with a sprained knee.

The Jets were bracing for the worst after Cromartie went down without contact yesterday, but that didn’t happen.

There’s no word yet on how much time he might miss with the sprain, though at this point, anything less than the rest of the season has to be a relief.

The team isn’t even prepared to rule him out for Monday’s game against the Colts, which would be a remarkable turnaround, after what looked to be a bad one.

Darrelle Revis' new team is getting the same results he's always had against Andrew Luck.

The veteran cornerback is still mystifying the young quarterback.

Revis picked off one pass, recovered two fumbles and helped the suddenly opportunistic Jets defense come up with five turnovers again Monday night to help New York pull away for a 20-7 victory at Indianapolis.

''It's Monday night, on a big stage, and we knew what type of game this was going to be,'' Revis said.

So he delivered a prime-time performance.

Revis' homecoming has been everything New York fans hoped for. With Revis and Antonio Cromartie locking down outside receivers, first-year coach Todd Bowles has been able to rely on his defensive front to stop the run and routinely pressure quarterbacks.

In the opener against Cleveland, New York converted five turnovers into 21 points.

Against the supposedly, high-powered Colts offense, they did it again. The Jets matched that five-turnover total, kept the Colts out of the end zone for three full quarters and never gave Luck a chance to get comfortable. The result: New York is off to its first 2-0 start since 2011.

''The name of the game is turnovers and keeping the score down, regardless of whatever else happens,'' Bowles said.

Indianapolis (0-2) is keeping its dismal start in perspective.

This time seems different. Luck was 21 of 37 for 250 yards with one touchdown, three interceptions and lost one fumble. After a strong start, Frank Gore finished with 15 carries for 57 yards and Donte Moncrief was the only receiver to top the 50-yard mark. Moncrief caught seven passes for 122 yards and Indy's only touchdown.

Part of the problem was Revis and his teammates.

The other problems were self-inflicted. On Monday, Indy was called for 11 penalties, Gore bobbled a handoff at the Jets 1-yard line that Revis recovered in the end zone, Adam Vinatieri missed a 29-yard field goal - the first time he's missed one from shorter than 30 yards since 2007 - and for the first time since 1997, the Colts were shut out in the first half in back-to-back weeks.

Indy has scored just 21 points in eight quarters, and inside the stadium, the fans who roared for Robert Mathis' return and Jeff Saturday's induction into the ring of honor, booed heartily as the mistakes piled up.

''You can't penalize yourself, you can't turn the ball over,'' Colts coach Chuck Pagano said. ''We have to protect, give him (Luck) a clean pocket. You can't drive the length of the field and put the football on the ground.''

Fitzpatrick finished 22 of 34 for 244 yards with two touchdown passes and one interception - getting his first career win at Lucas Oil Stadium. Fitzpatrick became the first player since 1950 to start five consecutive road games against one team while playing for five different teams. He was 0-4 in the previous starts.

Eric Decker had eight receptions for 97 yards before leaving with a knee injury, and Brandon Marshall caught seven passes for 101 yards and one touchdown.

But it was defense that ruled the day.

The Jets struggled to put this one away, though.

New York couldn't score again until Nick Folk made a 35-yard field goal late in the first half.

Indy finally got on the board with Luck's 26-yard TD pass to Moncrief with 10:07 left in the game.

Fitzpatrick answered on the next series with a 15-yard TD pass to Marshall and Marcus Gilchrist's late interception set up Folk's final field goal.

When Geno Smith returns from his broken jaw, his starting job won't be waiting for him.

On Tuesday, Jets head coach Todd Bowles announced that Ryan Fitzpatrick will remain the team's starting quarterback, even after Smith is fully recovered from his injury that was suffered when IK Enemkpali punched him last month.

"Ryan is our QB right now," Bowles said, according to Manish Mehta of the New York Daily News. "We're going good. We have good chemistry right now. Geno understands that."

Posts : 43179
An MRI on Jets quarterback Ryan Fitzpatrick’s left thumb confirmed the initial diagnosis that he suffered ligament damage when he went down at the end of a run during Sunday’s loss to the Raiders.

That was the message from coach Todd Bowles, who also said Monday, via Manish Mehta of the New York Daily News, that Fitzpatrick will need to have surgery “at some point.” For now, though, he’s being considered “day-to-day” as scheduling surgery is a question of pain tolerance and hasn’t been ruled out for Week Nine as a result.

Fitzpatrick isn’t the only injured quarterback for the Jets right now as Geno Smith was forced out of the game for a couple of snaps after hurting his left shoulder and abdomen. Bowles said “there’s a chance” Smith could play this week, but confirmed that the Jets are looking at options to supplement rookie Bryce Petty on the depth chart. They are reportedly not interested in Ryan Mallett, but Bowles mentioned Matt Flynn, who spent time with the Jets in the preseason and is a free agent, as a name on the radar.

“He’s a possibility,” Bowles said. “He’s one of the names that we’ve talked about.”

Bowles also said that the team is waiting to see if wide receiver Brandon Marshall and center Nick Mangold will be healthy enough to face the Jaguars, leaving the Jets with a two-game losing streak and an overload of uncertainty on offense 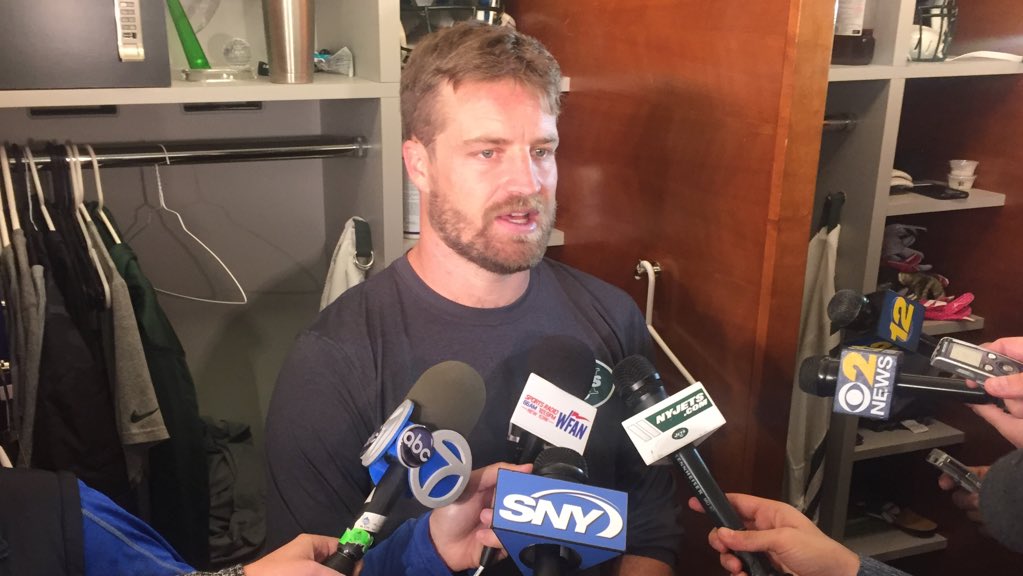