Posts : 68994
Age : 46
Location : sam u rovu protiv kijavice korone
The Jets lost one of their most famous fans Wednesday with the stunning death of actor James Gandolfini, 51, aka Tony Soprano, who reportedly suffered a fatal heart attack or stroke while vacationing in Italy.

"We're deeply saddened to hear about the passing of our friend James Gandolfini," the Jets tweeted Wednesday night. "Our thoughts and prayers are with his family & friends."

[+] EnlargeGanolfini
Rich Schultz/Getty ImagesActor James Gandolfini, who died at age 51 on Wednesday, was a longtime New York Jets fan.
Gandolfini was a Jersey guy long before he became a suburban mobster on TV. He was born and raised in New Jersey and attended Rutgers. He went to many Jets home games in recent years. In fact, he witnessed at least three memorable games -- a fourth-quarter comeback win over the Houston Texans in 2010, the emotional and dramatic 2011 opening win over the Cowboys on the 10-year anniversary of Sept. 11 and the crushing Christmas Eve loss to the Giants in 2011.

The accompanying photo is from the Christmas Eve game. Judging from the look of angst on Gandolfini's face, it could be his reaction to Victor Cruz's 99-yard touchdown. (On a personal note, the gentleman in the background is my father. Gandolfini, seated in the row ahead of him, graciously posed for a picture with members of my family before the game.)

Not many people know this, but Gandolfini narrated the video of the Jets' 2011 season, which was used as part of NFL Films' "NFL Yearbook" series. It was probably the best thing to happen to the Jets that year, an 8-8 disappointment.

Gandolfini's most celebrated connection to the Jets occurred in June 2007, when then-coach Eric Mangini made a cameo appearance (as himself) in one of the final episodes of "The Sopranos." Mangini didn't have any speaking lines; it was just a quick exchange of pleasantries with Tony Soprano in the fictional restaurant of his boyhood friend, Artie Bucco (John Ventimiglia).

"It took me a long time to get into character," Mangini joked at the time. "Playing me eating dinner is a real stretch, but I worked with an acting coach and I think I really nailed it."

Mangini said he wasn't afraid of getting whacked.

"I knew the context of what we were doing prior to getting into it and felt very comfortable with being at the restaurant," he said, laughing. "It's not like Tony and I had any previous affiliation or subsequent affiliation. It was more or less just meeting another person at a restaurant who happened to be a fan of the Jets."

Posts : 70140
Age : 35
Location : na dnu dna
1. If you're talking about the Jets , you start with the quarterback situation. Barring a preseason meltdown, Mark Sanchez should be behind center come Week 1. Geno Smith is now the future of the franchise, but that doesn't mean the rookie needs to be pushed into action before he's ready. Sanchez's $8.50 million in guaranteed money promised him a roster spot in 2013. Taking advantage of Sanchez's presence by using him as a bridge to Smith can provide legitimate value. And who knows, maybe Sanchez goes "Eye Of The Tiger" and takes advantage of the last of nine lives. Stranger things have happened.

Posts : 70140
Age : 35
Location : na dnu dna
2. I'm still trying to figure out the logic behind letting Dustin Keller walk. The tight end signed a one-year, $4.25 million contract with the Miami Dolphins , the type of team-friendly, prove-it contract even the cash-strapped Jets could've taken on. An underrated offensive player, Keller was a Sanchez security blanket that, if healthy, would have helped mask the team's deficiencies at wide receiver. Even stranger is the succession plan, which involves Jeff Cumberland and the battered remains of Kellen Winslow Jr. Good luck with all that.

Posts : 70140
Age : 35
Location : na dnu dna
3. Rex Ryan is squarely on the hot seat, but we're sure he took some solace in the team's decision to fortify his beloved defense with two first-round draft picks. Dee Milliner is a potential shutdown corner who steps into the massive shoes of Darrelle Revis , while defensive tackle Sheldon Richardson gives Ryan a versatile interior lineman who can get to the quarterback. Richardson and fellow first-rounders Quinton Coples and Muhammad Wilkerson form the core of a potentially great front line.

Posts : 70140
Age : 35
Location : na dnu dna
4. The Jets have every right to be nervous about Santonio Holmes . By far the team's top offensive threat, Holmes doesn't sound close to 100 percent and is no lock to be ready for the regular season. If he isn't, a lot of pressure will fall on the shoulders of underrated slot man Jeremy Kerley and the unproven Stephen Hill , who runs like Bambi and catches like him, too.

Posts : 70140
Age : 35
Location : na dnu dna
5. Back to Rex. He's one of the biggest stars in franchise history, but he's in grave danger here. General manager John Idzik's itch to bring in his own guy will grow if the Jets stumble out of the playoff picture for a third-straight year. Ryan enters a situation in which he's being asked to improve a team that just traded off one of its greatest players ever. A winning season will be a challenge. That might be what it takes to keep his job. 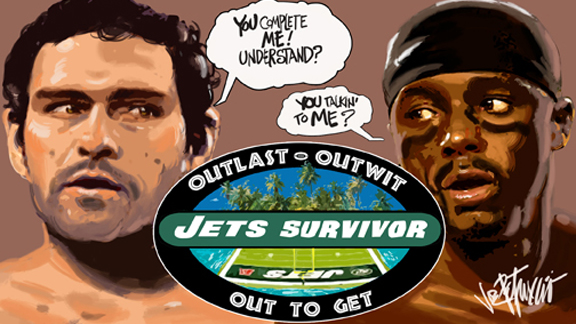 But it’s impossible to turn the other cheek (yeah, I said it) when it comes to the bizarre video posted by TerezOwens.com of Sanchez dancing with a couple of women and, naturally, showing his bare ass to the camera.

Of all players in the NFL, it’s fitting that it would be Sanchez, who became the butt (yeah, I said it) of jokes from sea to shining sea after running into the rump of guard Brandon Moore during a prime time Thanksgiving game and fumbling the ball.

The new video, which clearly contains separate images of Sanchez’s face, comes at a time when Sanchez hopes to fend off rookie Geno Smith for the starting quarterback job. While it shouldn’t affect his standing among teammates and coaches, it gives the media and fans even more reason to shake their heads and wonder whether Sanchez truly gets it.

He’s on his own time, and he can do whatever he wants. But when he’s facing the most important training camp of his NFL career, it makes sense to be careful about not doing dumb things like, you know, dancing with his pants down in front of any electronic device capable of delivering its contents to the Internet.

So, basically, in front of any electronic device.